The Great Debate – ‘Starter’ on the Bit or not?

Home ⁄ Horse Problems Index ⁄ The Great Debate – ‘Starter’ on the Bit or not?

The Great Debate – ‘Starter’ on the Bit or not?

John O'Leary Horse Problems Index, Mouth of the horse above the bit, Behind the Bit, on the bit, starting the horse 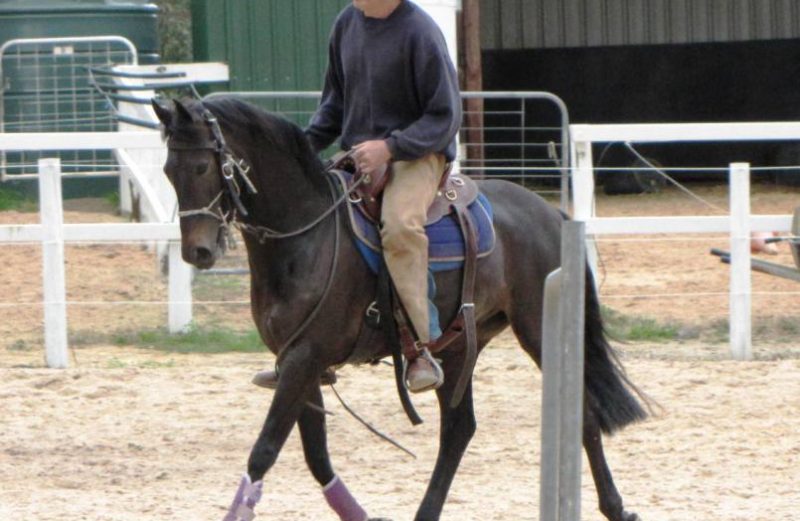 Go here for the Video

THE MOST CRUCIAL THING I HAVE LEARNT

Historically, due to the fact that Breakers were of the Western or Stock Horse influence, the instruction to the owner upon picking up the newly broken in horse was often, “There ya go, stay off his mouth for 6 months and you’ll be right” I think I may be partly responsible for the debate that I see raging of late, on Forums around the Country, on the subject of whether the ‘Breaker’ should have it’s head down, (in a frame) and/or ‘On the Bit’ God Forbid.

I note that many people demand and get 6 weeks to break in a horse, I am hearing 12 as well ( I wish) …but I have to declare right here and now that ALL of our Breakers leave here on 3 weeks, either ‘coming onto the bit’ or ‘on the bit’, forward, leg yielding, bent, flexed, long and low, relaxed and with impulsion. Ready for a Prelim Dressage Test. So it puzzles me why there is such a debate. Is it that we are breaking convention? I don’t know, but I’ll tell you this. I cannot stand riding unsophisticated horses, every young horse I meet takes to it as ‘normal’ and like ‘ducks to water’ and have no difficulty whatsoever in progressing with ease. So why shouldn’t we turn out such horses?

The recent Pod Cast called, ‘Listen to Seat’, was made during filming of a piece for our ‘Green to Dressage’ DVD and this horse was used because we couldn’t find a Breaker on the property that hadn’t progressed too far for Mrs. HP to show teaching that she needed to but it was interesting that this young horse on his 6th only ride in his life was showing some form already, even with 20 year old fishing line as reins. So I am completely at ease with our processes and would like to think that it is a bench mark for the rest of the Breaking Industry to aspire to 🙂 What is the secret? the mouthing

I read the article on breakers…I could not agree with you more…..However I believe people especially novices get confused with “stay of the mouth and use of the bit” ….lets take the breaker I have seen two types. I can tell, without even seeing your method that you don’t use this one that’s for sure… A so called breaker is in our local area ties his horses heads in with a pulley system walks away and leaves them for hours at a time with their heads strapped in.. I shouldn’t laugh but it is rather comical when the horses are being long reined they have no idea what the bit means other than to hold their head in, if any pressure is applied to the reins they suck back even further. with the breaker getting very frustrated indeed…Imagine trying to ride these horses…
lets take the other sort of mouthing. lateral bending and constant use of the bit…Lets say the horse is asked to give his neck to the side the horse softens instant reward and relief but does the breaker hold it there no way he gives completely a “loose rein” ask that same horse again and it is lighter softer and gives more quickie why because the horse has been given his mouth back this process …..It may be constant use of the bit but it is consent reward and relief from the bit….the first step toward vertical submission… Lorraine

Thousands of Horses have told me Lorraine, that this is the only way to ride a ‘Starter’, for they know no other….

Ah Ha. Well aren’t you a smarty then? 🙂 You worked it out. Laterals are the first step to forward submission. Let’s make that the quote for the week then. Now go to the Forums and here them decrying One Rein Stops and the like. 🙂

So it was quite ironic that half an hour ago, the owner of the fishing line horse dropped in with a Box of Chocolates for me. Yay. Most kind. Sereno arrived back with her last week at the very same time as another Breaker from one of the States most well known Trainers. The other young lass is having some problems apparently and so Sereno’s owner says, “Come for a Trail ride with me.” Oh no, my Trainer said don’t ride in open spaces”….but in the end she was convinced and went on a ride around the property together. The other young lass was riding a very tense and shying horse, spinning and running away while ‘young Sereno’ went across and checked out the frightening Bush as if it wasn’t there. The other horse was on the bit with head held high and Sereno had his neck low and relaxed. “Do a one rein stop” yells Sereno’s owner but the lass didn’t know what that was. She gets shown, has a go and the horse spins like a top, as they do when they don’t have a lateral mouth.

So here is another quote for you 🙂

“A relaxed ‘green horse’ is one with lateral  submission and a low neck carriage.” Not jammed up with head held high but then again, you know what I am going to say next, don’t you Lorraine? “Laterals equals suppleness, equals submission equals relaxation” Which German was it that said that ????????? 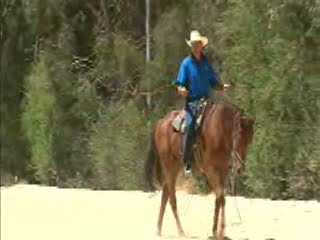 THE MOST CRUCIAL THING I HAVE LEARNT

When the ‘Breaker’ completes the process and is handed over to the owner, I know that learned resistance commences on that day. The Horse is a great Student and is ‘hanging off every word’ of the Trainer/Owner.

From the very first ride and each and every one after. If an owner elects to stay off the mouth of the ‘green horse’ and leave ‘on the bit’ until later, the good foundations are kept for then, However, unless they are from the Western influence, the chances of any Person who comes from the ‘English Roots’, is zero.

I have escorted over 50,000 People on Pleasure Rides in my career and the number of ‘English Discipline’ Folks I have met that can ride a true ‘Pleasure Rein’ (one that the Horse doesn’t run into the Hand when poking) have been Zero. The reason for that is that the English World are brain washed that CONTROL is found in TWO REINS and front Brakes. They are mis-guided.

You only get one chance at keeping a good mouth on a young horse because from day one, the number one intention of all of them is to ‘resist’ They are magnificent learned resisters as it is as they are born that way so learning resistance to the bit is an absolute ‘snap’ to them. The owner doesn’t have a clue what is going on beneath the surface and via the thought processes of the young horse as it stocks away all of it’s new found knowledge on resistance and those resistances are taught in so many subtle ways that the owner would never realize. I see it daily as I ride around with people. 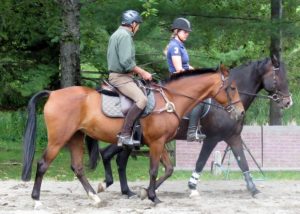 Going no where with the Hand Brake on

Here in Britain, two Horses having their Mouths ruined ( as well as being made Sad)

As I said, show me the ‘English’ influence Rider who are not a captive to their teaching. Whether it be Pony Club or general Coaching, they have no hope of letting the reins go if it is their decision to reserve the training of the mouth to later. None. So as they ride around, thinking that they are staying away from the mouth or using it sparingly, they are not and they never do. Resistance is learnt within the first one second of their first ride and there are many. Here are some:

The first one is obvious. There can be no argument to it. Given the fact that the owner is not going to train the ‘Green Horse’ to go into a ‘frame’ and to submit to the bit and round up, even if they rode with a pleasure rein, as soon as they want to stop they are going to take up the contact and apply the breaks. Yes, ever so careful maybe but with a maximum of upwardly mobile resistance being taught to the young horse, and every single time that this occurs, the horse locks away the info to build upon it each time. A ‘resistance Bank’ is held in their mind. 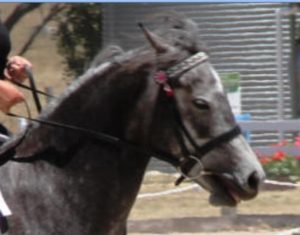 Above the Bit builds under neck and ruins topline

The owner walks along on a pleasure Rein, like the one on the left below and even if the rein was a little longer than that, every time the head of the horse bobs in and out with the action of the walk, the rein hand which is often fixed during rest and relaxation will cause the mouth of the horse to subtly and ever so lightly run into the hand of the Rider at every stride. I watch this every week. The Rider is completely unaware that this is occurring. If the mouth of the horse moves the hand of the Rider 1cm, it immediately signals the fact that it can take the hand of the Rider and that it succeeded. That is the very first commencement of learned resistance. As each bump goes by, so the lesson is cemented. Everything builds from there on.

Should you want to stop a horse during that first 6 months without contact rules, I suggest the use of lateral and bending controls only because if they picked up their reins and applied the brakes prior to submission being learned by the horse, there is instant resistance identification made. A learned evasion starts. 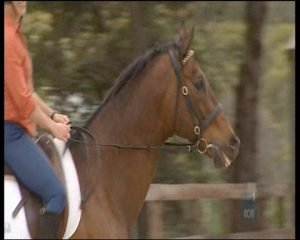 Above the Bit, resistance and building under muscle 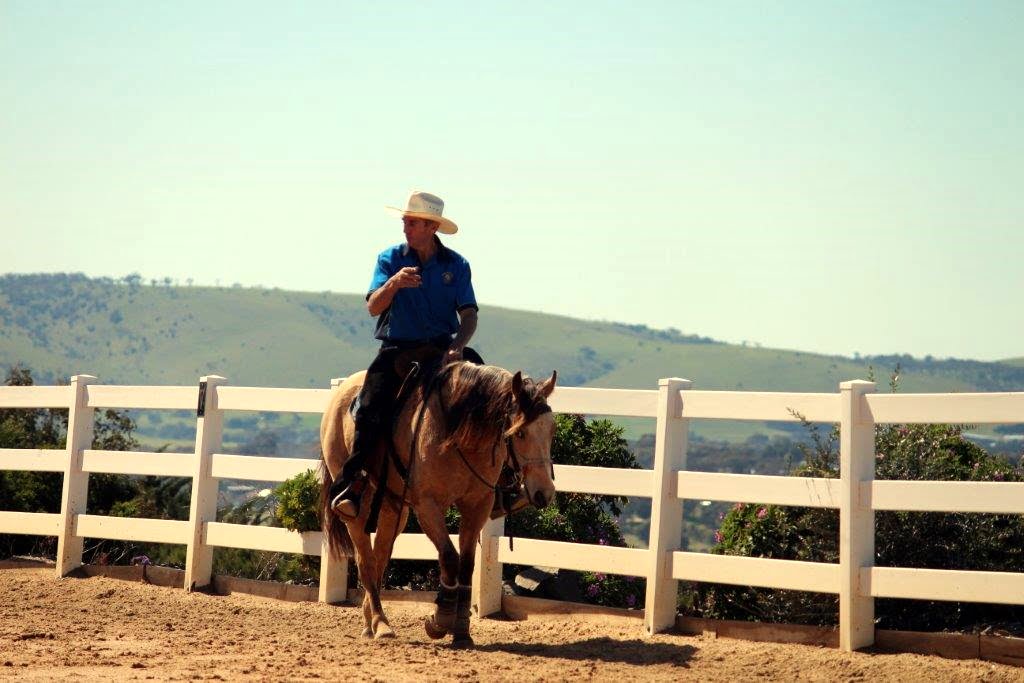 Bucking the Owner prior

BUT HOW CAN YOU CONTROL THE GREEN HORSE ON A PLEASURE REIN???????

You learn how to ride Horses with the most POWERFUL tool of all….the Laterals!!!! (which this Website is full of)

as I leave You, here is my last Starter, 3 Weeks ago, having his THIRD ONLY RIDE IN HIS LIFE. (a dangerous Warmblood) 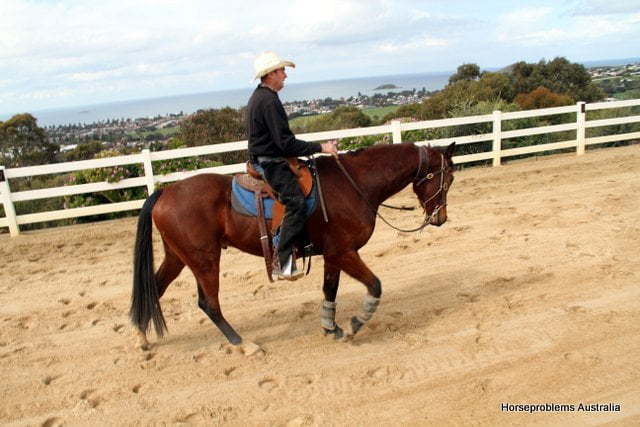 Tagged on: above the bit, Behind the Bit, on the bit, starting the horse