ThisWebsite is an attempt to teach about the subjects that are rarely ever taught within the Official Equestrian Education System in Australia. The subjects covered herein are the important ones, the ones that should be taught.

This site is aimed to help those entering the Industry who stumble around looking for help but don’t know where to get it. It is also an attempt to save those that represent the high attrition rate from falling out of the Industry due to a lack of the type of real knowledge represented on this Site.

This effort is for the sake of the horses.

It was always inevitable that John O’Leary would be a Horseman. His blood dictated that he had to be. He really did not have an option. He comes from a long list of exceptional Horseman who have had a major impact on the horse world in Southern Australia. 5th Generation and from County Cork in Ireland.
John’s Dad at 87. 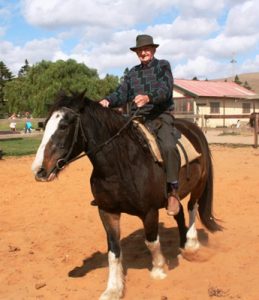 The whole family became renowned horse breakers and worked as teamsters, digging the massive drains that empty the South East of South Australia, with heavy horse and bullock teams. Johns Grandfather on his father’s side was a colt breaker and could lift a massive wheat carrying trolley off the ground while others greased the wheels. He had been a well-known bullock teamster as well. He enlisted for the First World War as did his eldest son Eugene. They both made it home safely. One of the sons became a legendary Horse Vet and practiced for 50 years from Naracoorte.

His name was Joe O’Leary. He never held a car license and his clients always had to pick him up and drop him home. At 81 years of age, he rode in the Naracoorte Hunt Club Cup. In a recent edition of the Adelaide Advertiser, the story was told how Uncle Joe had to attend to an elephant that was part of a circus that had come to town. During the street parade, the elephant, which was pulling the pie cart, sat down and badly burnt his rear end. Uncle Joe prescribed a massive poultice of 12 loaves of bread etc, which the staff strapped to the animal’s posterior.

used to stay at the O’Leary Residence in Naracoorte when between Racing and other Criminal activities in Adelaide or Melbourne.

One of the daughter’s in the family was Olli O’Leary and she married a bloke called Alfred Grant who happened to invent Surfers Paradise in Queensland. He was an experienced Horse Person but Olli had such an influence on him, that in the end, he became a student of Thoroughbred Breeding to such an extent that he would stay in bed each day studying until 1pm whilst the maids served his meals in bed. He had turned his bedroom into a library of bloodstock books. He then went out and spent $15,000,000 in 1963, buying Queen Elizabeth’s Stallion, “Charleton” and another champion stallion from America called “Beau Brummel” He then housed them at a newly built stud at Toowoomba , “Gainsborough Lodge”, where in those days, (1970) $25,000 of white paint was needed to paint the fences. 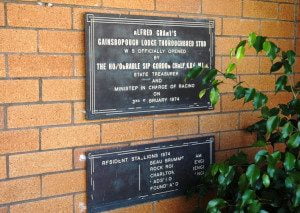 The other daughter, Lena , married Stan Hitchcock who was the Warder of the Mount Gambier Jail.

John’s mother also came from an interesting background. Her grandmother’s sister married Sir Henry Parks who founded the Bank of New South Wales (Westpac)  and helped write the Australia’s Constitution. The other sister married Adam Lindsay Gordon the renowned poet and horseman, who, for a bet, jumped his horse over the fence above the blue lake in Mount Gambier and out again. There is a plaque erected at the site. Later, Lance Skewthorpe bet him he could do the same deadly jump, landing on a narrow ledge above a 400 feet drop down the cliffs. He successfully completed the feat after months of training to jump the horse and stop in an instant. A Monument stands there Today in the location of ‘Gordon’s Leap’

John’s father, was also a horse breaker, racehorse trainer and jockey. During the 2nd World War, he was in the first 10 to enter the Puckerpunyal Army Camp, was the first Cook, the first Squad Drill Instructor and the first Rifle Instructor. He taught ‘Bush Law’ and horse riding safety to the Officers. Ces was the escort of choice when General Blamey, Officer in Charge of the AIF wanted to go riding. His Brother Ray, also got involved in the same job.

A number of the family excelled in the art of fighting. Michael and Ray

O’Leary, John’s cousins, fought professionally for the Jim Sharman’s boxing troupe. His uncle Eugene, representing the A.I.F, fought the American champion on board an Aircraft Carrier during the 2nd World War and was beaten on points. At his next fight, his opponent became the World Champion.
Ces was great Mates with the AboriginalTracker Ryan who worked for the South Australian Police. Ces was responsible for getting the Police to place a Memorial in a Park in Penola, the Home of Mother Mary Mckillopand the Church and Nuns where John learnt the Piano for many Years. (and got smacked over the knuckles with a Ruler often – something he probably deserved 🙂

John’s brother Dennis is also a colt breaker, saddler (winning the Churchill award), horse dentist Bull Rider and racehorse trainer of repute. He runs High Country Trails, Holidays on Horseback at Normanville an hour and a half south of Adelaide. He also runs O’Leary Racing from this Establishment and from Goolwa on the South Coast.

John Purchased the Property, in 1972 and named it ‘Comic Court Lodge‘ after the Melbourne Cup WinnerComic Court, who broke Pharlaps record, in 1950.

Bart Cummings got his Start there, as a Strapper to Jim Cummings and the Sire and Dam of Comic Court are buried down the back paddock, falling into their grave with forearms wrapped around each other as they died of Old Age.

John O’Leary founded Holidays on Horseback in Australia and escorted some 57,000 riders on these over a 15-year period. He also founded High Country Trails, which is still operating at Normanville and has been since 1975. 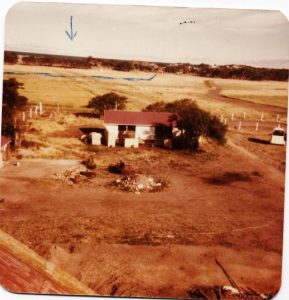 This is the Day that he climbed upon Fergussons Mill and with a Box Brownie Camera, snapped this Pic, went inside and drew where his dream Caravan Park would be built. 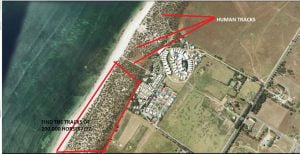 Cases of Gelignite were used by the O’Leary Boys ( Legal then…before Terrorists stuffed the World) because all the Power trenches had to be blown through Corral Reef, below the Paddock.

The Septic Tank was build onsite and on the Day that the Park opened, the O’Learys’ were inside the Tank, trying to get the steel form work out, but items started dropping out for the entry pipe as Folks began to arrive. They left eh form work (hired) inside the Tank 🙂 and paid the hire Company the cost.

Designed, had approved and sold the Land and Drawings for South Shores at Normanville. 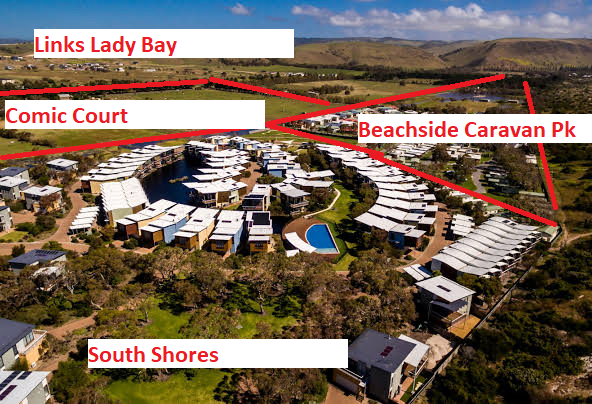 He has had around 25,000 horses through his hands as a trainer and re-educator and has been a career horseman for 40 years. Other interests have taken his fancy from time to time and he has designed and lectured at T.A.F.E colleges , consulted to the R.S.P.C.A., Consulted to the State Government in matters of the sale of crooked horses and has been an expert legal witness to lawyers for a number of years. A Member of the Commonwealth Government Committee that wrote the ‘Guidelines for Horse Keeping’ for Local Government throughout Australia. He had studied law for 7 years earlier in his life and Business Management at T.A.F.E and Govt. Workplace Trainer.

The first to run a Carnival type Race Meeting, with Book Makers, copied soon after by the S.A.J.C. and then spread Australia Wide. 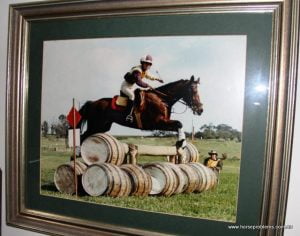 His wife Linda (his right arm) is an Equestrian Federation Coach and has herself ridden over 10,000 individual horses. John ranks her as by far the best educator of the young horse on the Planet. She is an NCAS. E.F.A. Coach. John and Linda have been Together for 29 Years and he met her when he sold Her the first Horse, which he ha just broken in.

In June 2017, she has surpassed Herself, with Her Mare, having Her 5th outing in Her Life, winning the Advanced 5.2 Official.

Now a Champion, at the Olympic Level

Apart from being a horseman, John is a horse dentist, farrier and a Government accredited workplace trainer for the Equestrian Industry. In 1996, John and Linda purchased the Gainsborough Equestrian Centre and named it after Uncle Alf’s place as he has passed on.

He owns and runs Horselaw Australia and pioneered Equine Law for the Horse Industry in this Country, influencing dedicated Firms of Lawyers into the Industry when prior, there were none.

His latest challenge is the Manufacture of the Worlds best Horse Floats, designed after Thousands of injured Horses he has rehabilitated during his Career and such work has driven every single change in Horse Float design in this Country, since 2001, except for the work of another Horseman 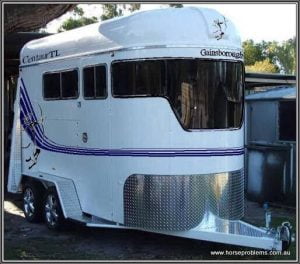 and has driven and invented almost all design improvements in Horse Floats in the last 15 Years, including inventing ‘running boards’ higher Floats and better viewing for Horses. Every height over 2170 mm was driven by John.

Clinicien around the Country and Our thanks to the 300 Melbourne, NSW, WA and other Folks for attending. 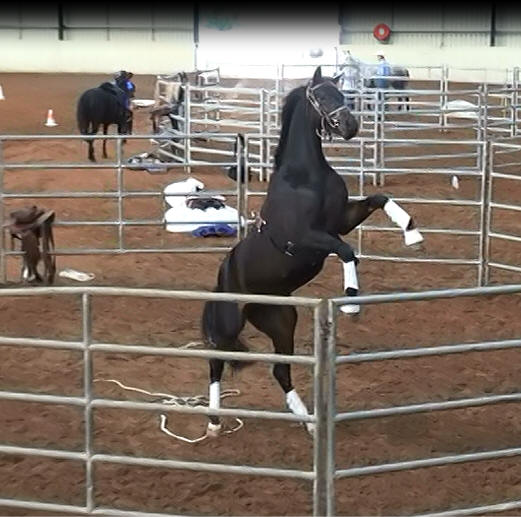 PROUD ACHIEVEMENTS OF THIS SITE