The Flexed Off Horse and repercussions

Home ⁄ Horse Problems Index ⁄ The Flexed Off Horse and repercussions

The Flexed Off Horse and repercussions 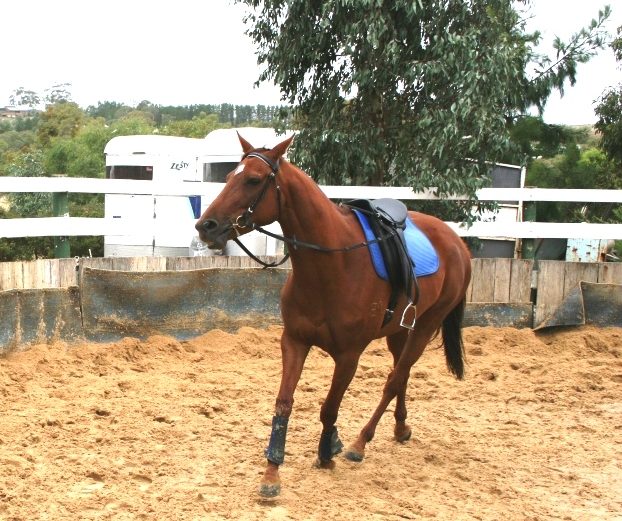 The Flexed Off Horse and repercussions are easily fixed and doesn’t have to be!

Riding Horses ‘flexed off’ happens to thousands of Horses as we speak. It is taught ‘cart blanche’ by Pony Clubs across the Country.
Watch this and please then JUDGE Your Coaches of the future, for if they allow this, they should be not Coaching!!!!

No Leg Yield – no Dressage!

In this DVD, John O’Leary trains a Horse that is also being ‘started’ to ‘Leg Yield’ as well as Off the Track Thoroughbred Horses. Remember…..”No Leg Yield – no Dressage”

I have often complained about the lack of Pony Club teaching. Especially the failure to teach to fix the most senseless fault of allowing riders to go around with their horses ‘flexed off’ in order to keep them on the circle and from dropping the shoulder and ending up joining the Coach in the centre.

Pony Club have always said to me that the subject is above Pony Club teaching and I guess therefore, Pony Club Curriculum. In excess of 90% of Pony Club horses go around like that. This means that the same number are learning the completely incorrect basics of riding and it also happens that the Problems that you hear about on this site are being manifested by that foundation.

I watched Mrs. HP teach a Pony Club kid. I saw the horse change before our eyes, the kid get a grin as big as Texas on her face and the Mum muttering things like, “that they had never been told this” (roughly interpreted)……the Kid went on to represent Australia in Aachen, 2015. That Day, the Horse went from, 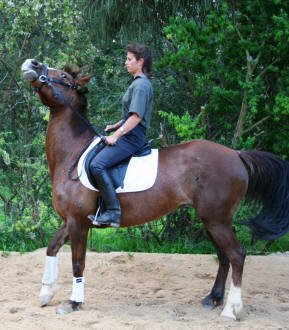 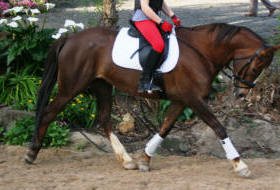 this in a Week

and the reason why the Mare had gone to protecting Herself by putting the Head way in the Air, was because she had started to suffer ‘Bridle Lameness’ and knew it was the wrong way to go.

Mrs. HP joined the head of the EFA Coaching, during a Clinic where the Zones best Pony Club Dressage Riders were being prepared for the State Championships. It was noticed that the Level 3 continually taught flexion and inside leg to outside rein, to these riders’, as is correct.  Mrs. HP then discussed the downfall in Coaching within PC and that in her opinion, this issue should be addressed.

The Level 3 agreed and said that they had in fact made the exact same point to a Pony Club Judging Clinic, where the answer was along the lines of that, in the Pony Club Dressage Tests, there are no collective marks at the bottom of the sheet, ie. for submission etc. It was pointed out by the Coach that perhaps they should change as with the explosion of Pony Dressage, riders will have to know it. Mrs. HP then said that, “yes, in fact the same Dressage Judges that judge the big kids, will be in fact judging the little kids in Pony Dressage.

Interestingly, there is always plenty of pressure about to have the kids go to the Pony Club Grade 1 Show Jumping, 1.20m I think. How is that possible? Riding a Grade One course with flexed off horses? Not for me. Perhaps that is what feeds through to our Olympic performance??????? Remember Athens?

If teaching correct Dressage is too much for Pony Club, why then does a high powered Dressage Coach from the EFA get the job of preparing them for the event? Surely they would be better off with someone teaching ‘flexed off’?…….

So why else does it matter

The fact is that the riding of Horses incorrectly according to Dressage Rules, directly deteriorates the Veterinary condition of them as well as diminishes the happiness of their working Life. Read here about “Rider induced Veterinary problems”

I won’t go on, except to say that Pony Club Mum’ and Dad’ should have a think about this. Remember, what keeps Horses ‘on the Circle’ and not ‘flexed off’ is simply the ‘Leg Yield’, and…….

that what naturally encourages a horse to put it’s Head down and soften, is ‘suppleness’, which is the opposite to ‘flexed off’

Riding Horses flexed off causes degeneration of the Sacroiliac, the Stifles and more

and another, ruined also……..

and just to Video Bomb You to Death……this……..

Go here if you need help. I can teach You live Online…….

Tagged on: flexed off, flexed off horse, pony club, riding horse flexed off, Sacro damage to the Horse, Training the Leg Yield