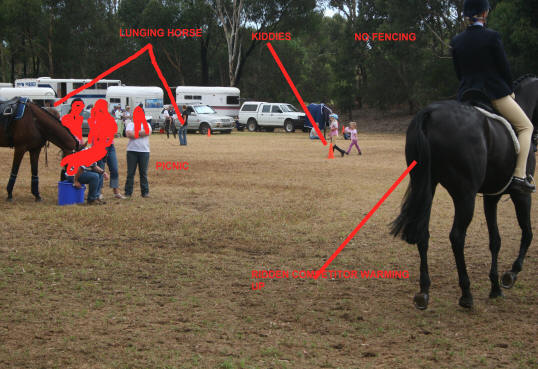 Since this Site Pioneered Horselaw in this Country, 18Years ago, many things have improved but they still have a long way to go.

I coined this quote.

“Horsemanship – the Art of reading the future, with ‘Risk Management’ in Mind”

Here we are, last Saturday, Dressage……

The Trailer Car Park is not the place to re-educate an 18 Hands Warmblood that is threating to Bolt!!!!!

Since September 11th, Risk Management Insurance has been basically impossible to obtain for the Horse Industry and has decimated a fair portion of the businesses in it.

Historically, the Australian Horse Industry has been a Risk Management nightmare and in some ways, they had it coming to them. Now, the Insurance Companies are trading off guarantees for improved practices, in return for the supply of limited Insurance risk.

I note that very little has changed. Individuals and Clubs are not getting the message. This is a small attempt at warning you in actual real world scenario’s, how and why you could be sued during your life as a horse person.

I am not a Lawyer and advise that you seek Legal Advice if required, however I have studied Law and consulted in many Court Cases involving horses and Risk Management issues. Moreover, as a Horseman, I deal with and think about such issues every day and in reality, can see dangers and risks far before others.

Remember, to be found guilty, they have to prove Negligence on your part, however, it can cost you big $$$ to defend any matter. You are best off protecting yourself before hand. Think safety and risk. If you are found Negligent by the Court, your Insurance Company will most likely refuse to pay out. Here are some possibilities:

I could go on for Hours!!

Is it possible that the following could be held as Negligence if one were sued?

SOME CASES I HAVE BEEN INVOLVED IN

The Council Grader Drive with his reversing Beep Beep….keeps reversing back towards Horse Riders, doesn’t take into account the fear this can cause.

One Horse loses it and this is the result……..

Horses come under the same Consumer Legislation as most other products and must be fit for the use for which it was purchased. You mis-represent the horse and you can be pursued through the Courts.

So, remember to be vigilant and to start thinking ahead. These days they are all your possible enemies who want to take away your family home.