LOADING AND FLOATING OF THE HORSE (Thousands of words)

LOADING AND FLOATING OF THE HORSE (Thousands of words) 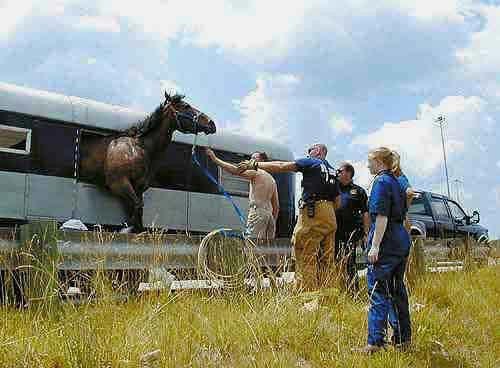 The loading and floating of horses is the stuff that divorces are made of. If you are a horse husband and the wife’s horse isn’t wanting to go in the float, get out of there fast!! Kids and dogs have been known to get into major drama if within range when things go wrong. Horse Floats are called Horse Trailers in the US.

If this happens whilst you are at a Show, you will quickly inherit a dozen other experts as well as onlookers. The experts will be all trying their pet system out on your horse and the onlookers will all be hoping like hell that the horse doesn’t go in and that the embarrassment goes on for as long as possible.

Each year, horses all over Australia get severely injured and killed by floating accidents of varying degrees. From Float rollovers to horses getting down because they have lost their footing from either slippery surfaces, too much speed around bends by the driver, over braking because of a lack of concentration or horses with psychological disorders caused by all of the above and other reasons. Climbers or scramblers being the most common. Then there are the injuries caused outside the float.

Since the invention of the rope halter and the Parelli lead rope in this country, 13 years ago, and due to the fact that they are not sold with instructions, many severe accidents happen during the dangerous tying up procedures coupled with the ill designed horse floats in this country. Each combine to make the outside of horse floats as well as the inside, death traps waiting to happen. Here are just a few examples that I see in my everyday work as a horseman and re-educator

I have never seen a float with a tie up point that is set at the correct height. This causes horses to get a front leg over  the lead rope, lift its head and flip over on the ground still tied up with the front leg over the rope.

THE TEACHING OF HORSE OWNERS

So, who teaches all of the existing horse owners and those born into or entering the Industry Well the answer is basically, no-one!! Pony Club doesn’t. T.A.F.E College doesn’t. The parents have never been taught. So is it any wonder why horses are hurt and terrorized Australia wide on a day-to-day basis?

It is a mystery to most people; just what it takes to put a horse on the float, every time, regardless of the drama. The answer is simple.

Horses go on to horse floats because they are made to and if you know how to make them, they will go on every time. Mind you, you cannot blame them for not wanting to go on. The horse float is the most frightening, unnatural environment for a horse to enter that man has devised. The only thing that is comparable is Racing Barriers.

In Australia, a high percentage of horse floats manufactured are of a substandard design in so far as horses are concerned. This is because mostly engineer’s design horse floats not HORSEMEN!

That is why I spend half my working life re-educating psychologically distressed horses. There are also floats with stability problems, a lack of room for the horses head and neck up front, too short in the stall and in particular, the view.

I have not found one Manufacturer who sells a float with the view being as horses want it. I am not going to tell why this is so for commercial reasons.

These should and will be in the future, banned from the road for safety reasons. Anyone who inflicts one of these upon there horse is irresponsible.

These are not preferable for two reasons.

FLOATS WITH CENTRE DIVISIONS TO THE FLOOR

There are horse floats around that have the center division that extends all the way to the floor.

These floats are largely responsible for the ruination of large numbers of horses as they turn horses into wall climbers or scramblers. Even the perfect floating horse can be turned into an unloadable horse by a center division that extends to the floor, in one trip.

I doubt if there would be one float with such a division or divider in Australia that hasn’t got major climbing marks and dents in it. Take a look. I bet you!!