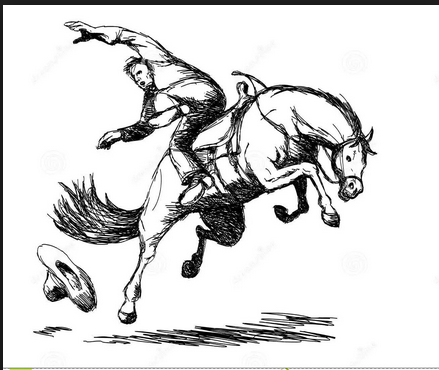 I get these letters almost every week so Hence this article:

I found your website (and lots of great information) and, yes, I hang on the reins. I realize it’s an issue.

My issue is rooted in my horse’s ability to take the bit and run away With me. I’ve had this horse for only six months, and he has run off with me three times. The first time, I was riding him on a loose rein and a very relaxed walk just warming up. The hay Truck had pulled up next to the arena, and when the driver let off the air brakes, it frightened him and off he went bucking & Bolting. I fell off and got pretty banged up.

About a month later, I was walking in another grassy arena during a Lesson. At one end of the arena, it is very overgrown with weed trees. Something in the trees frightened him and off he went again  bucking & then bolting. He ran around the arena about 10 times at full speed before I could finally gain my balance and grab an outside rein to stop him.

These two incidents were during the first two months I owned him.

I use, retrain and recommend the following system to stop bucking and bolting Horses. There may be gimmicks like ‘Buck Stoppers’ but I believe they are only masking the problem. First eliminate the Veterinary however!

Most Horses buck because they can but triggered by fear or Human mistakes when they are at the ‘green’ stage.  Generally at mounting. It is often a ‘learned skill’ and if they weren’t allowed to do it in the first place, a lot wouldn’t even get good at it.

I have Horses Buck on the lunge or in the Round Pen every day including today. It matters not at all, providing they do not have a Rider on their back. In fact it does them good to have a go and fail to get rid of a saddle or other equipment because I can go to School on their style and tactics and as I said, they get over it and learn that it is a pointless exercise.

A lot of young Horses do not know how to buck well and some not at all. I have one of these here right now. Allowing them to Buck, even on the lunge, can give them a look at possible improvements through practice and so with those one’s, I normally discourage them by interfering with their head via the lead.

My new ‘Re-Mouthing the Horse’ DVD’s run 7 hours and 24 minutes and yes, I did surpass ‘Gone with the Wind’

RIDE HIM THROUGH IT!!!

I get told about Coaches saying to Pupils (most in self emptying Saddles) “Ride him through it…..keep him forward” Yea right, you show me how to do that Coach because most Pupils cannot ride Buck Jumpers. In fact, MOST PEOPLE CAN’T RIDE BUCK JUMPERS, including Coaches. To subscribe to that proposition is fanciful and imho as a “Risk Consultant” bordering on negligent and if there was an accident, could well be found to be ‘negligent at Law’ in the Courts. We should never allow Horses to Buck with a Rider on.

Horses that do get rid of a Rider are highly likely to become worse and actually be taught a good reason to Buck. Many a ‘starter’ or ‘Green Horse’ are ruined because of being allowed to get a victory early on. The entire financial investment can be lost due to a Rider being tossed off.

Prior to Mouthing, the first and natural reaction for a Horse in fear is to run or Buck and so I submit that it stands to reason that these two areas are the most important to shut down.

So these Horses that Buck are usually those that have been mouthed using the conventional systems of Mouthing a Horse that have been around forever. Driving Reins etc. If these Horses do get a fright and go to Buck or Bolt, they are always successful because all systems of Mouthing that I know cannot produce a Mouth whereby you can actually stop a Horse from Bucking during the frantic attempts. Only with my system can you do it and I do it every day of the week.

“Read my Lips” There is no way that you can stop an attempted bucking fit by using the FRONT BRAKES (two reins) but you can stop them using the LATERAL MOUTH So herein lies the key.

Put those two things in place and you have not only stopped your Horse from attempting to buck or bolt but you may even save your life or a life in a Wheel Chair. It is that serious Folks!!!!

“Read my Lips” rein handling technique is highly imperative!!!!! If your hand/arm DOES NOT TRAVEL PRECISELY the correct way, you WILL NOT have the strength to stop an attempted bucking fit. Especially for the Ladies. Watch this

The key to stopping both ‘bolters’ or ‘buckers’ is SPEED OF REIN HANDLING. That means practice, practice, practice so that your rein handling is the same as your Golf Swing….natural or second nature 🙂 You need to shut down the impulsion early and disengage their hind quarters to remove the Power.

So put together a top lateral Mouth, speed of rein handling and correct hand/arm co-ordination and you have a high chance of stopping them. I wouldn’t be saying it if it weren’t true for I do it regularly.

Rarely do people take what I just said, seriously and I see them get bucked off I chuckle plenty 🙂 “Ya can’t bloody tell em ” 🙂

Waste of time and actually can compound running.

Now have a read of these:

Finally, my system can be used by the Rider to brain wash the Horse whilst they are on the ground and actually stop bucking and bolting in real time. This is about brain washing the Horse and re-educating it whilst the Rider is in safety.