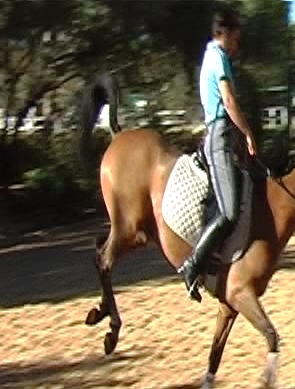 I would dearly love a $ for every horse that I have to assess due to stifle problems. The simple Veterinary description for this is something like the momentary locking of the patella or knee bone as it crosses back and forth over the joint. This gives horses some discomfort although Veterinary opinion says that there is little or no pain associated with it. I find that a little hard to accept.

This problem can come in varying severity and this can dictate what actions a horse will take in an attempt to rectify the problem. Some just try to work through it with out much affect upon the riders and others actually buck riders off, although in my experience, rarely are they trying to dislodge them. Moreover, they are kicking from the rear end in an attempt to free the locked patella. The causes:

HERE ARE THE INDICATORS

LOOK AT THE DIET WITH STIFLE AND OTHER PROBLEMS

Conformation plays a huge part in determining whether a horse is prone to such problems. In a high percentage of cases that we meet, horses are conformed either ‘bum high’ , ‘straight behind’, too long in the barrel or a combination of them all. Here is one such horse. straight behind, camped out, poor rump

A little known fact is that Vets’ rarely pick a stifle problem when doing an inspection for sale or purchase. This is because they rarely work them and never ride them. I have seen dozens of these cases.

If suspect, show you Vet the video and then request an X-Ray. If in doubt, we can help

This causes locking patella, crookedness in horses and lameness. In particular, the wide spread habit of leaving the rear near side hoof low on the outside and high on the inner. 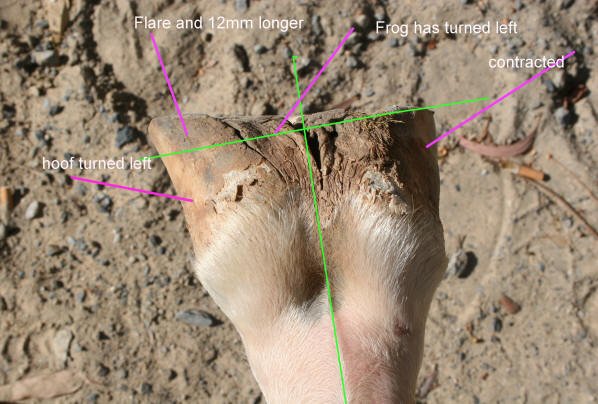 Low o the outside rear, a common cause for stifle lock

Treatment really should not be carried out until an X-Ray has been taken to eliminate joint damage or bone chips. Without this, all treatment is pointless.

These days, this is a highly contentious issue and most Vets’ don’t want to do it. I feel the main reason for this is that they read an American study some years back, which dealt with a survey carried out on a number of horses that had been operated on. It showed that a certain percentage developed arthritis of the joint later. A Vet in Victoria however, comments that he has done over 500 of these operations and thinks other Vet’s are a bit over the top with their worries. We completely agree.

X-Ray is highly crucial however. You HAVE TO rule out Bone Chips

We have had dozens done over the years and I am yet to see one suffer any ill affects after. I have never seen a horse suffer any ill affect during 40 years of observation of known subjects to the op. On the other hand, I have seen almost a 100% success rate in fixing the problem. On those that have been slow in mending, the cause has normally been the soft attitude of the owner in not pushing the horse through the prescribed exercise routines after the operation.

So the next time you see a horse bucking its owner off, have it checked out before sending it off to a horse breaker and telling him (as I have been) to give the horse a good bashing.