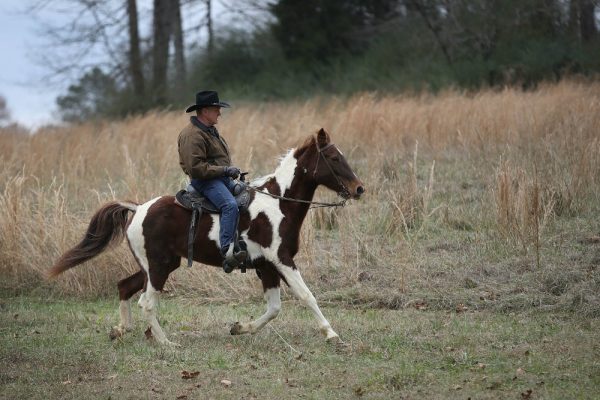 Due to my www.horselaw.com.au duties and experiences, and life in general, having been a ‘Problem Horse’ Trainer forever, I have seen many so called ‘naughty horses’, (Most like to blame the Horse), but almost all were Horses with problems.

What drives me is the fact that basically every Problem Horse that comes through my hands, still today, are blameless and just crying out for help

They indeed have either Psychological or Veterinary problems. 99% of Horses that I have met, that Buck, do not do it because they want to.

Of the Veterinary problems with Horses, the vast majority of them come in the rear end. Stifle and Sacroiliac issues being the majority and caused by a variety of things:

This article is about the latter:

It is a fact, that Riders’ cause Veterinary problems in Horses. I see it all the time. It is not their fault but the fault of the Educational systems that do not adequately teach Horse Training, they mainly focus on Rider training and position.

The British Horse Society and the Pony Club systems are the main Culprits and here is why:

To now put it in a more technical way, they are allowed to and the majority do:

It is a fact, that unless a Horse is ‘Balanced’ when carrying a Rider, it cannot be ‘relaxed’, the number one step in the ‘German Training Scale’

It is also a fact that, unless a Horse is ‘Balanced’ it is tense and then it runs, all compounding a fight between Horse and Rider……but

and back to the point of this article, the ENTIRE TIME a Horse is ridden in this style or manner, it’s athletic and muscle conditioning is being weakened and the road to ‘Rider induced Veterinary Problems’ starts and builds. You see, here is what happens……

FROM A PONY CLUB RIDER

I’ve been very good for quite a while and not critisized Pony Club but Weekly Events eventually wear me down and I just have to have another crack in the hope a Horse somewhere may be helped. Here is a Letter from one of my Readers of many Years, reflecting on Her past.

Thought I might send you my status about a horse that use to cow kick etc, and about how everyone failed me as I beginner who had no clue,

This video is from years ago, when I had the issues with jack cow kicking, and eventually me being amature and getting on from a wooden fence and jack cow kicking and getting cought up.. This still to this day would have properly been the worst day of my life. Everyone that was there thought he broke his leg, it was horrible. Its also frustrating because I had so many experts and expansive vets look at him and no one helped me and said keep riding. No one suggested that horses actully talk to you, and you have to listen. I was a beginner and did not know this, pony club, vets, chiros, saddle fitters etc should have been warned me back in the day that you have to listen. I brought jack out to=========(the first time we met) finally someone gave me proper advice, the horse is sore, and he is screaming that to you. After the accident jack started on arthritis needles and the kicking stopped but I still felt he was uncomfortable so I retired him. I had people tell me to send him to trainers, belt him, hit him etc for doing it but the whole time he was screaming to me he was in pain. This horse right here triggered something inside of me, that the horse never lies and to never give up, so I then got destiny and trained her up and I really enjoyed it.. Now I have started and trained many horses and if it wasn’t for my amazing horse’s jack and destiny, there would be no way I would be going this path in life..
Nic 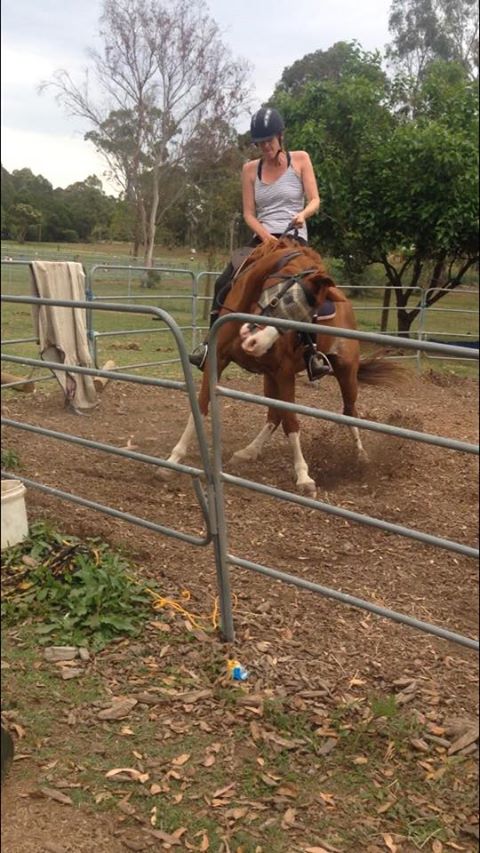 and Nic is now a successful Trainer in Sydney……

Yes I know, it very easy to be Blind to all of this at Pony Club, with the adoring Parents and the untrained Coaches often acting like Olympians but thsi Horse here gives the perfect snapshot of Pony Club in Australia, as it has always been and probably still is.

Yes and then comes the Dressage Day where we try our very best, using the knowledge passed onto us by the system and again, here we have the snapshot of the scene Australia Wide. The Kids learn it from the Peers because everyone goes around ‘flexed off’ ‘Above the bit’ ‘hollow’ ‘ crooked’ and if not truly unsound often ‘rider induced unsound’……and who pays the price????…….yep…the Horses who everyone Lurves so much!!!! ……but then the UNSOUDNESS.
See the DE-GENERATED REAR END???? That’s what Pony Club Riding Causes as Horses go around as Cripples over the Years. Soldato was almost lame!!!!!!

As you can see he was totally unsound, not once except for one lady told me this

I had pc instructors hit him with poles when he was kicking at me when getting on, now that I am more experienced I know how stupid and unreliable most horse people are and am discusted by the advice I was told back then. don’t judge my riding, I was a total beginner back then.. looking back now I am cringeing 🙁

Not Your fault. Well done on progressing and having a search for knowledge, which will help every other Horse You own in the future. The Horse was always unsound, throughout all Your Vids.  You have risen above it and now You too can be frustrated like I 🙂

He was a Pony Club Star for many Years and ridden by some of those at the Top of the Tree and with the “Name’ which comes with Ribbon winning. Everyone thinks You are destined for the Olympics then and all the Young Kids of the Club emulate You for they don’t get told otherwise by the Coaches. Here is Soldato on his first few Rides.

This is all he could do for he was locked in Stone from being ridden like this for Years….yep…in front of the Pony Club Coaches!!!!

So Kids, start to question them, make them perform. IF YOUR HORSE DOESN’T LEG YIELD YOU know things are wrong!!!!!! Demand proper instruction!!!!!!!!!!!! for sure as Hell the Administration of Pony Club have never done it.

If you go and put a plastic wedge in your shoe, within a day, you will be stiff in the ligaments etc. You will immediately begin compensating for the pain, right? Walk like that for a Year and your Body will change. If I allow you to walk like that for a week and you didn’t know you had a wedge in your shoe, and I asked you to walk normal and straight, you would refuse? If I then tried to make you, you would get upset and fight that direction? Right? Horses are the same.

Even more so. Horses don’t know what is causing their pain and why. They just know that they have discomfort. The longer the Horse gets ridden incorrectly then, the more the ligaments and muscles start building incorrectly or abnormally from their original state and the more set in their ways they become. They choose to travel then, ‘incorrectly’. What’s more, they blame the Rider!

The longer they get ridden incorrectly, the worse their Muscle problems get. So then, if a ‘Proper Rider’ comes along and then asks the Horse to again travel as it used to, ‘correctly’, according to the Rules of Dressage, there is always a big fight which is only limited by the individual temperament of the Horse. From mere evasion to Bucking the Rider off. This is why when a so called ‘Problem Horse’ gets sent to a Professional Trainer (Dressage) they always get worse before they get better or always kick up a fight. If they get sent to most ‘Hack Trainers’, the Veterinary Problems will not be so evident, if at all. Due to the fact that the Horse gets it’s way to travel ‘incorrectly’ and to be compensating the whole time, where the Rider and the Coaches are oblivious to the issue. Just this Week, we have an afflicted Hack here, ridden by one of South Australians top Hack Names for just 3 Months.

Here is real time video of just two. I meet them every Week.

This Horse, although having bad conformation (straight behind) is not unsound. What you see here, is simply the objection that Horses put up when a good Rider tries to start them back to going ‘correctly’. A Day later, the Horse was going happily. This Horse is one of your classic Pony Club Rider compounded problems.
This Horse however, did have an underlying Veterinary Problem but not so bad as you are seeing here. It was able to be sold for $18000 to the Client and ridden through at the point of sale. without obvious incident. This performance, which ended in one step short of full on Bucking, was again, only caused by Mrs. HP demanding the Horse travel ‘correct’ and to carry it’s weight on the inside hind. (an assessment for a frustrated Owner) However, proving that Ridden style can both cause problems, compound them or even cover them up.  To the point where an Olympic Rider sold an unsound Horse by riding it incorrectly and then Teaching the Buyer incorrectly

Over the many years now and the thousands of Problem Horses and due to my Luck that my lovely Wife is a Grand Prix Dressage Rider and we compliment each other, we have now devised systems to be able to fix many of the minor real Veterinary Problems and ALL of the ridden one’s. How to pass that experience onto my Clients is not going to be easy but we have decided to do a major DVD Production on the matter. Using the real Veterinary afflicted Horses.

DRAW REINS however, cause and cover Veterinary Problems

The Market Harborough however, is my number one diagnosis Tool for deeply delving to find where a Horse is hurt. Meanwhile, the e-book that comes with my Remouthing DVD, touches on some of it.