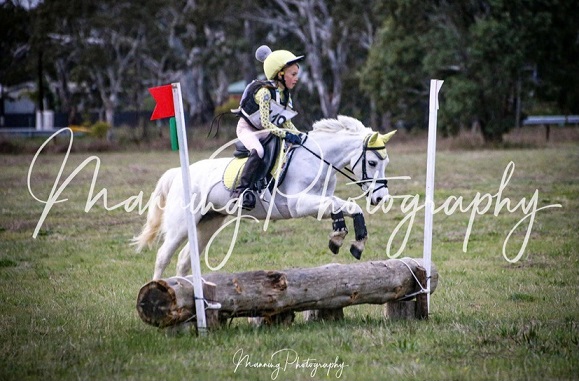 HI Folks, hope You are all well and didn’t get into too much Trouble this Week.

I have been sick with the Flu most of the Week and yet I had the Flue Shot a Month ago. This is a bit weird for I haven’t had the Flue in 6 Years, since having the Shot so I am thinking that this injection may have fallen short in effectiveness. Mrs. HP has had it too.

Before catching it, I did start on another major job, replacing the Roof of our Shade House and replacing Facia Boards because the previous Owner had hung them off those Facia Boards, which is a big no no. So I have Bricked up the Pillars to a higher Level, so that the A Frame Roof can run the Water into the House Gutters. I have to get a wriggle on, to beat the Heat though, or the Plants will die.

Dolce was entered for the Competition Today, in the Intermediate A, the precursor to the Olympic Test but it got washed out and cancelled, due to the Rains we have had here this Week.

I have spoken many times, about the many Horses that we meet, that have subtle Veterinary Unsoundness, caused by Riding Horses CROOKED. (apart from the rest of what the Horse has to endure

This Video is a good example of both the ‘ridden unsoundness‘ and the resultant ‘learned helplessness‘, exacerbated by the Spurs of course.

Saddle of the Week

Due to Covid and the disgusting state of Australian Manufacture, we have been struggling with a lack of METAL PRODUCTS, yes, made in China and India. Thankfully they have now arrived in Australia. The Gov needs to urgently start Manufacturing in this Country again!!!!

Congrats to all of Her Pupils out there doing so well this Weekend and the past Months. Bravo to You all!

Special Mention to Denise Thompson, Nicky Jones, the Carmichael Girls, especially those beating Mummy 😂 Ella Rose Evans, Annabel Mallord and others that the Results are not up yet. Well done Girls!!!

You were speaking to my husband yesterday.

We purchased a mare through the Andrew Wilson auctions on the 18/06/2021 for $3251.  I’ll attach a screenshot of the mares description, in short she was described as a good first pony for the vendors little sister, she no longer had any use for the pony and had sat in the paddock for 2 years. They saddled her up for the first time in 2 years for the video description and off they went, no buck, bolt, rear, no nasties etc.

After the purchase I contacted the owner, Taylah Mathews (details text to me by Andrew Wilson auctions), to organize pick up. I text messaged her asking if there was anything else at all I should know about the mare, her response was, no, she’s as advertised in the video and description.

When she arrived she had a few days to settle in, in that time I did become concerned when she became extremely nervous of the tractor going into the paddock, to the point she tried to push through the fence.  I thought it was odd that she had been walked so quietly through heavy traffic in the video but was terrified of a tractor.  5 days after she arrived she was saddled, lunged in our round yard before I hopped on her.  She was good, so my daughter had a walk around on her, no problems until she stopped dead, and out of nowhere exploded bucking.

It was completely unexpected & sudden.  No lead up to it, nothing scared her.  Since then I have just lead her around our property, where she has proven to be very nervous and flighty.  Certainly nothing I will be putting a child on again.

After doing some research we have found so many videos of the exact same thing with different horses, all being ridden by young girls, heavy traffic, over the bridge, up and down stairs, all look amazing.  This is the usual for Wayne Brown.

I have gotten in contact with a lady,——–, who purchased a horse off a young girl, the horse being completely not as described, she took the girl, Chloe Waterman, to court & won. Chloe said she was paid $500 to sell the horse for Wayne Brown.  Chloe does not want to be involved however ——who won the case is happy to sign a stat dec for us.

I have lots of screenshots of comments from people who have been sold horses that were lame, or not as described.

I managed to find the original owner & breeder of the mare, ——–, who sold the mare to —— on 16/07/2020.  She was sold to the family as a companion to a Shetland she had always lived with, the Shetland being for their 6yo daughter.  The breeder, ——–, then went weekly for the next 6 weeks to this families home to give the 6yo riding lessons on the Shetland.  She is also happy to sign a stat dec for us.

Wayne Brown owned the mare for roughly a month before getting his employee, Taylah Mathews, to advertise the mare through Andrew Wilson auctions.  Absolutely nothing in this animals description was true.

By listing an entry through Andrew Wilsons you enter a legally binding contract as stated on their website.  Under the Vendors terms & conditions it states listing information is to be as true and correct as humanely possible and all declarations as specified on your listing form have been declared to reflect this.

I sold our Shetland to be able to buy the girls their next pony, I understand a lot of people say not to buy through the auctions however now they are online a lot of genuine sellers do list their animals so they don’t have to deal with all the tire kickers.  I didn’t realise that this man has made a living out of falsely advertising animals that can be dangerous to some riders, especially young children.  Our daughter is ok now however it could of so easily not been the case with this mare.  Our girls now not only don’t have their old pony but I also don’t have the funds to buy them another one.

These young girls need to be held accountable for what they are doing as well, allowing this man to sell through them is enabling these accidents to continue to happen to people.  They may be manipulated but they are not completely dumb, they know what they’re doing is wrong.

Taylah Mathews wasn’t even the girl riding in the video, it was another of his workers, Taylah Webber, who rides most of the animals he sells through videos.  I messaged her to ask why she was riding the horse & who was the owner of the horse but she won’t reply.  I messaged her mother to see if she had Taylah Mathews parents contact details but she was as helpful as Wayne Brown himself.

The video file of Wayne Brown’s advertisement is too large to attach to this email.  I’ll send another email off my phone that has the screenshots of the mare’s listing.  I have videos of her carrying on in the round yard because of the tractor and happy to get more videos of her but won’t hop on her again.

Thanks very much for your time,

Well there he is.

If You ride or train ‘English Discipline’ You turn using the OUTSIDE REIN, not the inside Rein

A great illustration of how a horse is knocked off balance by using the inside rein to turn/bend. The right is correct, as the horse is turning with both shoulders, the left horse has been knocked over his outside shoulder, and will fight for his balance beneath the rider by allowing his haunches to fall in.

Bella Vista of the Day

Thought you might really like this one John. In the comments section of this post people said that Imperial floats and Exiss Trailers have them. I haven’t fact checked that for myself.

It’s frustrating. I had a transport pick up a shetland that I had sold. The man put her on the truck which had build in troughs that horses could reach. The troughs had pellets in them. For the shetland, these troughs were about eye level and if she wanted to eat something from them she would have had her mouth above eye level. Apart from her being at risk of aspirating bits of pellets by trying to feed with her nose above eye level, I didn’t want her eating any food she wasn’t used to. The pellets were removed at my request, but I was gobsmacked I had to even ask- that he didn’t recognise theses two risks himself.

Lol, not wrong. Unbelievable the lack of awareness for Risk Management in this Industry. It won’t change. We have failed. 20 Years of riding them and they learnt nothing Pam. 😥

As of next Week, in Britain, new infections in the Vaccinated, will exceed those in the unvaccinated. Here is a highly credible look at the stats around the World