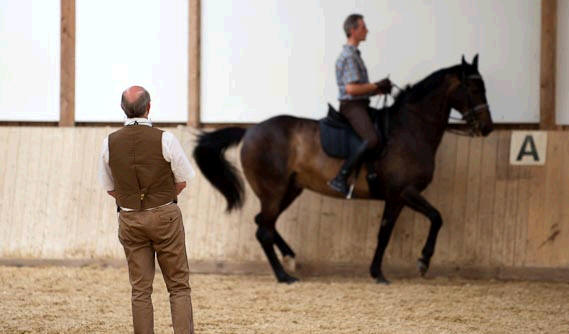 HI Folks. I am a Career Horseman, not a Scientist.

After a Career of helping Thousands of aggrieved Horses, my response to them this Year has been to write a handful of reviews of systems, as complained about to me by those Horses.  It is ironic indeed that those systems all have come from Scientific types of little or no ridden and competitive Dressage experience.

Across the many Thousands of so called ‘Problem Horses’ that I have handled in my Career, Veterinary issues have been front and Centre as to their reasons for acting up.

The psychological and physical study of these Horses has often brought me to the realization that ‘ridden’ training systems, have such an enormous effect upon their behavioral state. The list of reasons why ridden Horses exhibit evasion and more, is quite simply extensive but to name a few:

But then there are the ridden reasons…….so it on this subject that I am now willing to pass onto You, our real time experience, on real Horses, from the ‘Coal Face’ of the Industry. The place where Horses scream for help daily.

There are dozens of variations of core systems but essentially, the main one’s are………

Karl has widely attacked the Dutch systems on the Internet.

I don’t know what the Curriculum is but on the ground, through every Week of our Lives, we have met Horses that suffer at the Hands of the BHS systems. In general, the main causes are found in:

This system is most successful in building Muscle to prepare Horses for Dressage, a highly essential thing and something not done by enough Riders’

It has been highly contentious with the word ‘Rolkur’ being thrown around the Web (which we have closely observed in high level Camps in Holland) and indeed tested in that Country a number of Years ago.

Then ” Low Deep and Round’ being the next most used style in the Nederland’s and it is rare to see a Horse ‘above the Bit’, even at the Junior Levels the equivalent of Pony Club.

As another observation about the Dutch systems, they also bring to the surface, any hidden Veterinary weaknesses in Horses, EARLY in their Career, so that they may be taken care of or the Horse disguarded.

I have not studied these systems but nor have I met Horses that require help from the use of them. I note that Muscle development is normally very good.

To put it simply, they have historically followed the style of ‘long and low’ and then a higher collected frame, often slightly in front of the vertical although they have been heavily affected by the Dutch after the success of Anky at the Olympics with many now copying the more ‘deep and round’ systems, but it is the other end of the spectrum that I want to discuss here, the Philippe Karl system.

I have met several Pupils and followers of the Karl system and indeed, watched their Horses. Several things have stood out:

We have advised some Owners on this subject. Here are before and after Photos of their Horses.

Ridden as schooled in the Karl system. 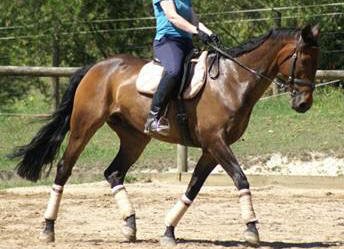 AFTER 6 WEEKS of rehab, with our system 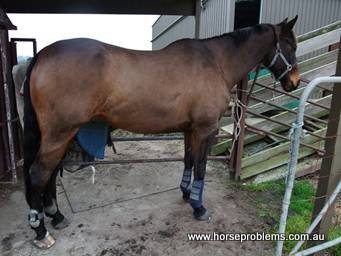 I can swear to You, that after a Life Time of meeting aggrieved Horses, any system that has Horses going AT ALL ‘in front of the Vertical’ suffer the following:

**note the under muscle

During the last few Years, I can report the witnessing of several of these system trained Horses that have developed the Vices of Bolting and Rearing as well as several nameless and notable F.E.I. Horses disappearing.

Compare the above Photo with this one

That is precisely what You may think of me ( if you don’t know my history)….fair enough……so I had better show You the other end of the spectrum, the very best of Muscle development and the opposite end of the scale of the Karl, McLean and other similar systems. We have rehabiltated hundreds and including another one this Day.

5th Competition in Her Career ( winning the Advanced 5.2)

AND A CURRENT PROJECT

and exactly 12 Weeks Today, with a Dressage Ridden system that supports Horses………..and with Ulcers as a result

You won’t read this on any Scientific Study but ‘read my Lips’ Dressage Horses continually ridden via the Hand, when NOT ‘inside Leg to Outside Rein’ and truly ‘Round’, with ‘lightness’ and ‘self carriage, caused Ulcers. We meet it all the time.

And so it was that the Black Horse was manufacturing shying all over the arena for the first 6 Weeks.

Such Riding also damages the ‘Sacroiliac’

Before I go, I will leave You with two things Thousands of Horses have imparted to us.

if You want to watch 27 of those Friends, go watch the DVD’s.

PS. After I wrote this, I actually went had a brief look at the Karl Website. I only ever comment on what Horses say to me. I do not research first. Ever. I found this from the German Dressage Federation:

A LETTER TO KARL FROM THE GERMAN DRESSAGE FEDERATION

One way to put it into practice which in our view is wrong, is the elevation of the horse created by a clear action of the hands, as you propagate it in your riding system and as we could observe for ourselves during your presentation at the Equitana horse fair.

Such a riding nearly always goes at the expense of the activity of the back and therefore also of the relaxedness and the health of the horse.

“Any ‘English Riding’ that has the Head of the Horse in front of the Vertical AND obtained by Hands, with a resultant ‘Hollow Back’  deteriorates the essential Muscle Groups required to carry a Human whilst performing like an Athlete.”