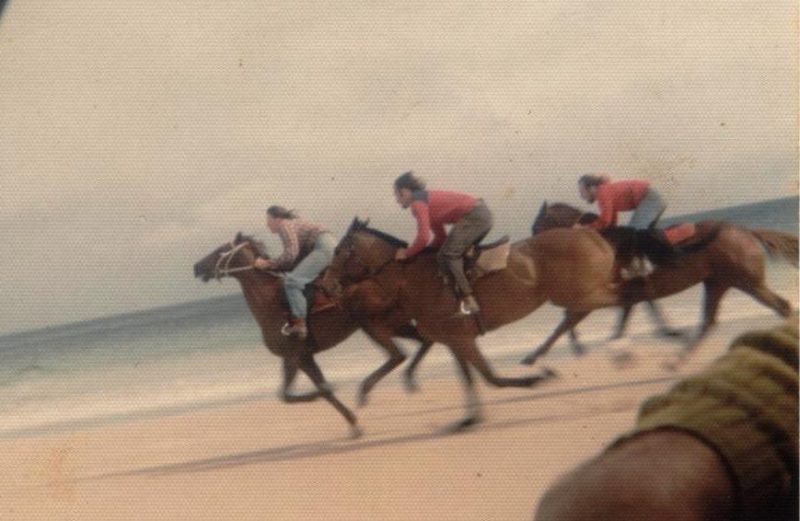 Hi Folks, hope You are all well.

It’s been a Hotter Week but very difficult for the Hay growers down here as we get Rain every 5 Days and had another 5mm twice this Week and again at the end of this Week 10mm.  Not easy to time cutting and baling because you really need about a Week for it to dry out when Green, before Baling.

Mrs. HP has been riding at 6am the last couple of Days but in the evenings, nice. Currently, at 6pm, it’s 21 Degrees here and 31 degrees at Golden Grove. The 10 degree difference yet again.

We are having half a Day off next Week, for Melbourne Cup Lunch at the Local, which will be nice. I have this Week installed Sprinklers in our Main Gardens, sick to death of the FAILED SYSTEM called Drippers. Useless things that block up all the time, Ants drink from them and block them, every fine tree root enters them and more. One has to forever be checking them. No more. Big Pump and Irrigation 🙂 Boom!!!

We have been risking Life and Limb as usual, trying hard to save more Horses. It’s a dangerous Life but very rewarding, although, this Week, quite upsetting, to think it possible that Ellie may or may not be able to be saved as a Riding Horse 🙁

The Horse has now been given every opportunity. Teeth done twice, taken to James Gardener, the best Body Man in the State, feet twice, fed like a Queen, Green Paddocks, worked, lunging, you name it, she has got it, however, something is not right!!!

SO WHAT COULD IT BE?

Now, You know that the Horse has always been fearful of the CONTACT, showing flashbacks, failure to keep the Head down for any length of time. Indeed, re-creating the exact same symptoms as this one in Holland.

Yet again. Before and After

PHOTO OF THE WEEK

BOOF OF THE WEEK

BELLA VISTA OF THE WEEK

HP SADDLE OF THE WEEK

We had a Horse here Yesterday. It had lost a Shoe and I had to pull the other one off to even it up, for the Riding Lesson.

Mr. Low Nails and as well, ‘Blocking the Hooves”  and making the Hoof fit the Show, not the Shoe fit the Horses

He well known. Must have had a bad Day!!!

TIP OF THE WEEK

” The feeding pf more natural foods, rather than Livamoll, expensive pellets, produced 9 manures during a Night. Switching to grains, lupins, oats and a small amount of pellets, produced 6 larger and much better quality manures.”

Many congrats to the new Lady who is looking after them now. They have never been so happy. Out in the sprawling acres and treated like Kings and one Queen 🙂

NEWS OF THE DAY

To the punters and bookies, he was Only Money. But to jockey Simone Vella, the gentle thoroughbred she trusted with her young daughters was just ‘Jack’.

Five years ago, Ms Vella wanted to retire the struggling racehorse and keep him as a pet. Last week, she was sickened to see him named among the thoroughbreds slaughtered under shocking conditions at Queensland’s Meramist Abattoir during the ABC’s 7.30 program.

The explosive 7.30 report, which aired last Thursday, revealed allegations that hundreds of Australian racehorses are being slaughtered for meat. It also aired graphic footage of horses being beaten, shocked with electric prods and kicked while they lay dying after being shot in the head with bolts at Meramist Abattoir in Queensland, where Only Money was among nine thoroughbreds reportedly slaughtered.

Footage the ABC also aired showing Only Money racing was filmed in 2015, Ms Vella said, when he was living on her Hawkesbury property, being trained by her then-husband Matthew Vella, and winning some races for owner Kevin Bastian.

“We had a bit of success with him. He won a couple of races,” Ms Vella said. But the horse was “always a little bit sore”.

“When he showed us that he didn’t want to [race] any more, that’s when we called the owner,” she said. “He didn’t race on well, he didn’t finish off well, that normally is a sign that they’re not wanting to be there.”

The couple made an offer to his owner to take him on as a pet, because he was “so quiet and he was so good with the kids”, Ms Vella said.

“My kids were so young then and they could lead him around. He’d put his head down to their height… He could live out his life with us,” she said.

But the owner decided to keep racing the horse and handed him to another trainer, Garry Frazer.

“We don’t own him, we’ve got no legal rights over him, so what the owners want him to do he’s had to do,” Ms Vella said.

“He was the most gentle, gentle horse. There’s no way he should have ended up [in the abattoir]. I don’t even know why he was taken over the border.”

Road to the knackery

How Only Money ended up in a Queensland abattoir is a mystery even to the man who eventually sold him to be turned into pet food.

Only Money continued racing with his new trainer but did not have much success and needed long rests between starts. His owner, Mr Bastian, ended up giving Mr Frazer the horse.

About three years ago, he in turn handed it over to Upper Hunter owner-breeder Greg White, as a riding horse for his wife on their Scone property.

By August 2017, Mr White had made the decision to sell Only Money to an abattoir.

It’s a decision he said he did not take lightly. The horse “was developing some pretty odd and unstable traits” and “got progressively worse to handle”.

He was not aware of any rule against slaughtering thoroughbreds, he said. He had also never personally contacted an abattoir, but rather called a buyer to take the unwanted horse.

“There’s a regular advertisement in all papers that has people that take sick, injured animals away. I rang one of them,” Mr White said.

“The guy who takes them away often finds homes for them himself, that’s what he tells me.

“How that horse went from Scone to Queensland, I don’t know.”

Mr White was not willing to reveal the buyer, but said he believed out of 1000 horses he’s sent away only 10 of them would have ended up being killed for pet food.

“We do not take our breeding game and animal welfare lightly,” he said.

“In my experience it was mentally deteriorating,” he said. “I made the decision to send it away to the abattoir.”

Former Wodonga trainer Brian Cox has died in a truck accident on Talgarno Road, near Lehmans Road on Monday morning.

Brian Cox an eleven time Wodonga Cup winning trainer was employed as a truck driver as he served out his three and a half year ban for the administration and possession of a banned substance.

On Monday morning Cox’s truck was heading away from Albury-Wodonga towards Talgarno when it lost control and rolled sadly killing Cox during the incident.

“He’s been heading away from Albury-Wodonga, and for whatever reason, on exiting the bend he has lost control of the vehicle. He’s been killed as a result of the crash,” Sergeant Cameron Roberts told the