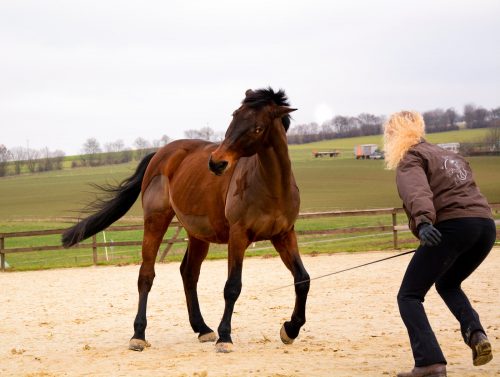 Feeding time can be one of the most dangerous times for horse owners and I have to warn that the lack of rules causes many horses to be sent to me for re-education. I include buck jumping.

Feed time is when horses fight for their position in the pecking order. You are being sized up as to whether you are number one or number two.   Fail in this test of assertiveness and you are destined have a horse that doesn’t respect you. Lack of respect equals problems for you in the future.

At Feed time, You are immediately being included in their Herd, with their Rules, not ours.”

There are two main venues where the horse puts the amateur owner through the assessment phase. To decide whether you are worthy of being the boss or just second in charge. They are, feed time and lunging. If you are not up to the job, the horse will assume the role and immediately lose respect for you. That loss of respect, quite frankly means that the horse doesn’t really like you any more. How do you feel about that then?

This behavior starts in foals at about 5 weeks old and in fact, they are the dangerous ones.

Would you believe that I have horses sent to me that are bucking their owners off and this is primarily caused by a lack of respect and associated rules at feeding time? Here are some rules that always should be adhered to:

I have a horse here today that bucked her lady owner off twice. It was caused through a lack of respect during the feeding regime.

I have a pony here at the moment that has become so feral due to bad feeding rules that it rears and strikes, spins and kicks the feeding person with both back hooves. I had this one yesterday: Read about it here and know that there are thousands of these out there.

Well, if I ever needed any more proof about the Pony Club taught system of how to lead a horse, I got it today. There is no doubt that it is so bad and it does so much damage to the training of horse and people that it would even be responsible for sending horses to their deaths at the Abattoirs. For that is how out of control some horses actually get when led in a such a fashion and so it was today. The 3 year old 14hh Filly would you mind, purchased on the weekend for $3500 and totally and utterly out of control on the ground to the point of being completely dangerous. A spoilt rotten little bitch (pardon the French) Had already savaged a visiting person just wanting to say hello and had attempted to kick, bite and crush the new owner when attempting to saddle. Forget Bridling. She got Reserve Champion at her Hack Show though.  I was videoing her, minding my own businesses when she suddenly backed up towards me and gave me both barrels for just being there. Then we broke the bloody string would you believe. I luv string. What a wonderful experience. Just what the horse needed……yea right.  Owner catches it, spinning circles with elbow in neck and owner being carted in the opposite direction to where she wanted to go. Quite comical if it were not so serious. I was asked to float it home and do some work on it haha. I hadn’t gone equipped and it had the PC webbing halter and the PC 4 foot long elastic rope. Fronted it up to the float thinking it may just walk in. Why it’s been to a show and won Reserve Champion lol. You wish. Home I went for the rope halter, horse lead rope and Mrs. HP. After trying to kick the bosses head off once, it was in the float in 90 seconds. I can’t wait for the morning Nah, guess whose fault? Yep, not the horse. The owner!!

RULES THAT I TRAIN AND INSIST UPON

Train your horse by dismissing it to the other end of the yard or if in a paddock to be at least 15 meters away. This normally means taking a lunge whip in with you to re-establish the rules of feeding.

After a few days, the ignorant horse will not try to evade you by walking around you to the feed bin. It will realize that the rule is to present it’s head as a salute to you before eating. 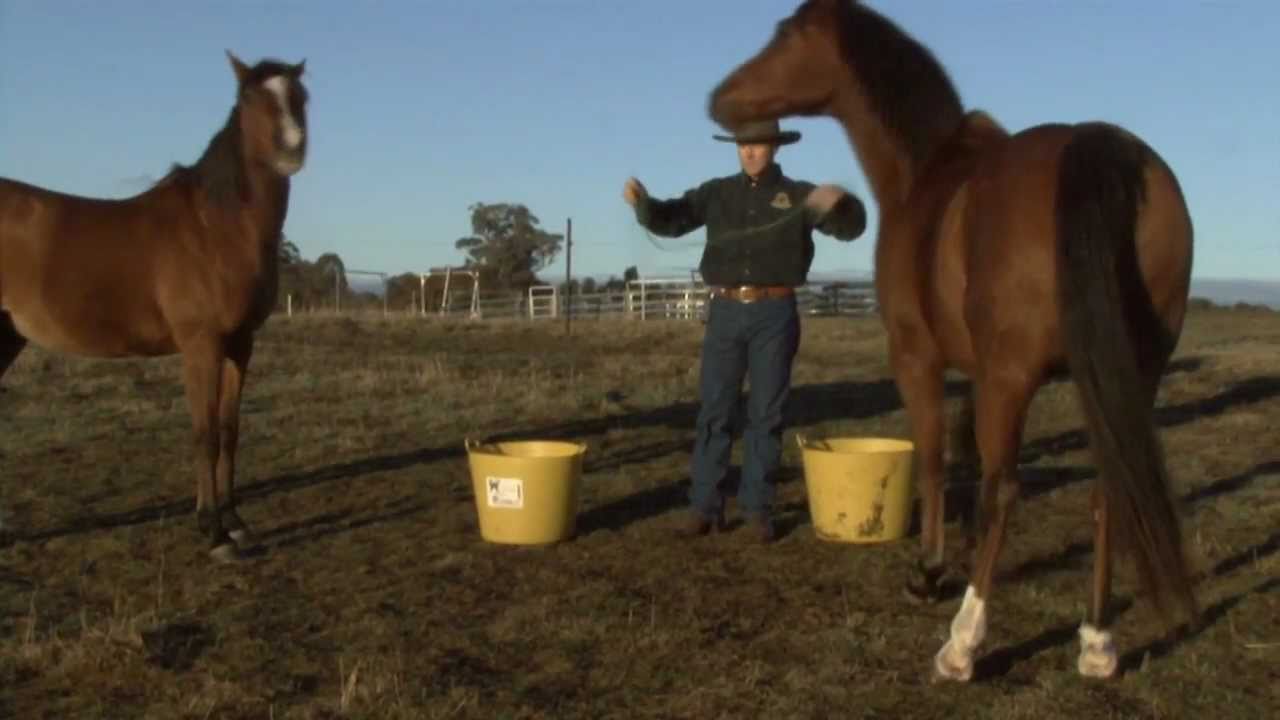 I once knew a woman that used to half sit in the feed bin and pet the horse. The Horse breaker that it went to failed in the job and the lady cannot ride her little $10,000 darling.

After a week, your horse will stand to attention, 15 meters away and await your command. i.e.. OK. If it is any closer, you are weak and the horse knows you are.

Therein lies the problem people get with arrogant feed time horses. The horse is the master and the human is the servant. That equals no respect and that equals everything up to buck jumping.

So, what do you do if the horse has got to the stage of being out of control and you are now worried. It is lunging at you, threatening to bite, kick, rearing up, striking? You simply must take control back and take it back NOW. That takes about 5 seconds and is achieved with a lunge whip, stock whip, bucket, tree branch or anything else that takes your fancy. No time for sophistication here, in my writing or your actions. Simply attack the horse and chase it off. Give it the ‘Mother of all shocks’. Re-elect yourself the boss and it the second boss. Simple as that. 5 seconds.

The answers are all on this Website. Start with the Video Portal and the “O’Leary system of ‘Join Up’……Your Horse will be fixed inside 2 Minutes.

and here he is 2 Weeks later, started to Saddle meanwhile.

Tagged on: Feeding the Horse with Safety, feeding time rules